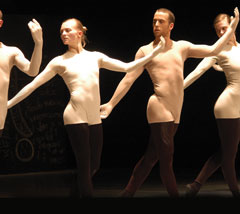 Batsheva Dance Company, heralded as “one of Israel’s most treasured cultural exports” (The Columbus Dispatch), premieres Deca Dance, a full-evening compilation of eight provocative works by artistic director Ohad Naharin, for one performance only at Annenberg Center for the Performing Arts, 3680 Walnut Street, Philadelphia, PA, February 3 at 7:30pm.

Known to push the edges of expectation, 17 dancers hurl themselves into Naharin’s intrepid choreography marked by zealous rituals, intense gestures, kinetic unison sections, bold, witty and tender partnerings (at times with the unsuspected audience), and surprisingly off-balance flailing moments. Music features 15 distinct sections including J.S. Bach’s “Goldberg Variations,” a remix of “Over the Rainbow,” an Arabic pop score and dancers singing a patriotic Israeli anthem. Seattle Post-Intelligencer notes “Deca Dance is an extraordinary feast of movement. Virtually every morsel is different, and wonderful.”

This one-night only performance will take place on Tuesday, February 3 at 7:30 pm. Ticket prices are $48, $42 and $38 and may be purchased by calling the Annenberg Center Box Office at 215-898-3900 or by visiting www.pennpresents.org. Dance Celebration is presented by Dance Affiliates and Penn Presents. Its 27th season under the artistic direction of Randy Swartz salutes The Dancemaker.

Naharin notes, “Deca Dance is something I have been playing with for some time. It’s a modular piece that keeps changing. I can reconstruct my work and create something coherent from the broken pieces, that gives me, the dancers, and the audience pleasure.” The Philadelphia premiere features segments from eight works spanning 16 years including Naharin’s latest creation B/olero (2008) to Maurice Ravel’s music performed by Isao Tomito. Episodes from Max (2007), Telophaza (2006), Three (2005), Naharin’s Virus (2001), Zachacha (1998), Anaphaza (1993) and Mabul (1992) are juxtaposed into short dramas or hints of stories culminating in a visual spectacle. Naharin draws his source materials from social revolt, folk dances and everyday life in a troubled and untroubled world.

In Zachacha, dancers moving to lounge lizard music and dressed in shapeless black suits and fedoras sweep through the audience, selecting audience members to dance with them on stage. Anaphaza features 15 dancers in a semi-circle in front of chairs responding to the crashing repetitive rhythms of a Passover song. Set to Israeli Arab composer Habib Allah Jamil’s riveting soundscore, Naharin’s Virus (originally an 80-minute work based on Peter Handke’s 1966 play “Offending the Audience”), explores the intersection between art and Middle East politics as well as the role of the theater audience. Rakefet Levy designed the form-fitting white leotards and black thigh-high leggings worn by the dancers suggesting dichotomy. It took Naharin three months to choreograph Three, a three-section work titled in Latin — Bellus, (beauty), Humus (earth or soil) and Secus (which translates as this and not this). The program mentions the titles of the works but not the order in which they may appear.

Batsheva Dance Company was founded in 1964 by Martha Graham and Baroness Batsheva De Rothschild. Led by artistic director Ohad Naharin, together with house choreographer Sharon Eyal, the Tel-Aviv based company’s 65 members – dancers, technical crew and administration are driven by a common vision – to excel in art and to strengthen common human values through the power of creativity.