Friday Night Workshop-As held on every Friday night since 1970, the workshop will continue with community members dancing and moving to live music. Led by Manfred Fischbeck and Brigitta Herrmann, the Friday Night Workshop invites all members of the public to explore dance through improvisation. Come and help us kick off the Winter Fest 2009.

Group Motion Performances-In light of the company’s 40 years, Manfred Fischbeck, artistic director and co-founder, felt the urgency to celebrate. This year’s Winter Fest company performance will be a reunion of sorts for past and present company members aptly described as the “Group Motion All-Stars.” Company members will return to Philadelphia from abroad, across the nation and the local area. Former members who will be participating are Heidi Weiss, Jennifer Mann, Nikki Cousineau, Aura Fischbeck, Laina Fischbeck, Megan Bridge, Emily Hubler Ramey, Lesya Popil, Katie McNamara and Myra Bazell.

Performance Workshop– Now in its Fifth year, the Performance Workshop is a culmination of improvisational workshops and rehearsals, led by Brigitta Herrmann and Manfred Fischbeck. This year’s theme is Sources, focusing on family, food, environment and relationship. Enjoy watching Group Motion workshop participants perform and showcase their creative talents through text, sound and movement. 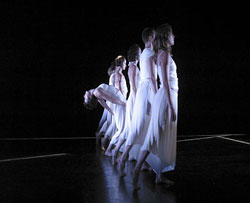 Group Motion Performances/Saturday, Jan 3** and Sunday, Jan 4, 2009 @ 8pm****Saturday evening’s performance will be followed by a reunion party.
Tickets are $20 general/$15 for seniors and students

Tickets can be purchased by calling Group Motion’s office at 215-387-9895 or emailing Katie Knight, Program Associate at kknight@groupmotion.org *** If you are interested in seeing more than 1 event, a weekend pass is available for a discounted rate.

Manfred Fischbeck, Executive and Artistic Director
Manfred Fischbeck is a choreographer, composer, director, and teacher in which he draws on his background in theater, film, and writing. Manfred has been awarded numerous grants and fellowships for his substantial work in dance, multi-media and interactive technology, and interdisciplinary collaborations with artists worldwide. This includes funding from the National Endowment for the Arts and regular commissions to create new works from Dance Advance, a program of the Pew Charitable Trusts. Manfred also tours extensively, both solo and with the Group Motion, in the United States, Europe, Asia, and South America.
Since moving to Philadelphia from Germany in 1968, Manfred has been a vital resource within the arts community. He has served on the faculty of the University of the Arts as as an Adjunct Professor of Dance since 1972 and has lectured regularly as part of the Theater Arts Department of the University of Pennsylvania since 1982. He has served on the Dance Panel of the Pennsylvania Council on the Arts, the Board of the Greater Philadelphia Cultural Alliance, and the Board of the Philadelphia Dance Alliance.
He and Brigitta Herrmann also created the Group Motion Workshop, an improvisational dance workshop for the public based on the structures used by the dance company. The workshop has been offered every Friday night in Philadelphia since 1972 and is also offered on tour and in special week-long retreats. In 1996, Manfred was instrumental in establishing the model dance company collective, the Kumquat Dance Center.