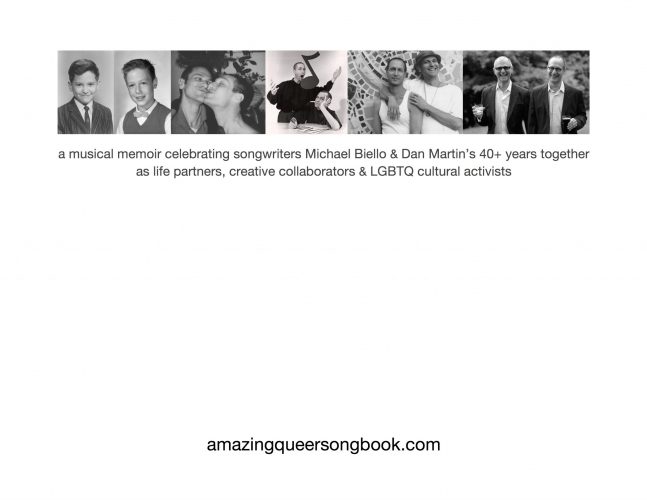 How can an artist share their history and legacy? A book? A film? A website? Digitize? Catalog? Archive? Exhibit? , A few local people will gather for a PDP Informance conversation around how they are approaching this subject. They will share examples of projects in various formats and stages of collection that they are currently engaging in, to a keep a history.

The notable participants Michael Biello, Dan Martin, Megan Bridge, Peter Price and Arthur Sabatini will join PDP Director Terry Fox for a conversation with the Informance audience. The discussion will open from these micro efforts to a larger discussion about the need for a centralized permanent hub for Philadelphia’s cultural history. How, where and what modes of archiving are best to engage audience in the present?

Michael Biello and Dan Martin will show some of their evolving online memoir, Michael & Dan’s Amazing Queer Songbook, which weaves together short musical films, words, and images to tell their unique story of collaboration & love.

Arthur Sabatini recently retired Associate Professor of Performance Studies in the School of Humanities, Arts, Cultural Studies at Arizona State University, has returned to Philadelphia where he is currently collecting and re-editing his writing for a collection on artists, including Lee Breuer, John Cage, Robert Ashley, Fred Ho, Armand Schwerner, Annson Kenney and others. He will discuss his most recent project, working on a book documenting and marking the work and life of Philadelphia Artist, Performer and Writer of the 70’s, Annson Kenney.

Megan Bridge, dancer, choreographer, producer, and writer based in Philadelphia, is working with her life partner and artistic collaborator musician/composer Peter Price on an archive of Group Motion, with whom both of them performed. They are co-founders of Fidget – an organization that facilitates the creation and performance of their own works and of others. as well as stimulate discussions around the arts. Peter Price will share his experience with the archive of electronic music composer Bruce Haack.

Philadelphia Dance Projects has initiated two digital collections The Local Dance History Project (2010) and the Old City Arts History Project (2019) to share a history largely undocumented at present in which dance and performance artists played an integral role, in a particular moment in Philadelphia in the last half of the 20th century. Links to these projects-in-progress are posted on PDP’s website. Continuing these precedents an Informance session focusing on history was included in the Fall series, and the April 21 Informance will be the finale to the engaging and eclectic Spring PDP Informance series. Tying in with the Fidget programming reinforces our commitment to include Dance History in our ongoing programming.