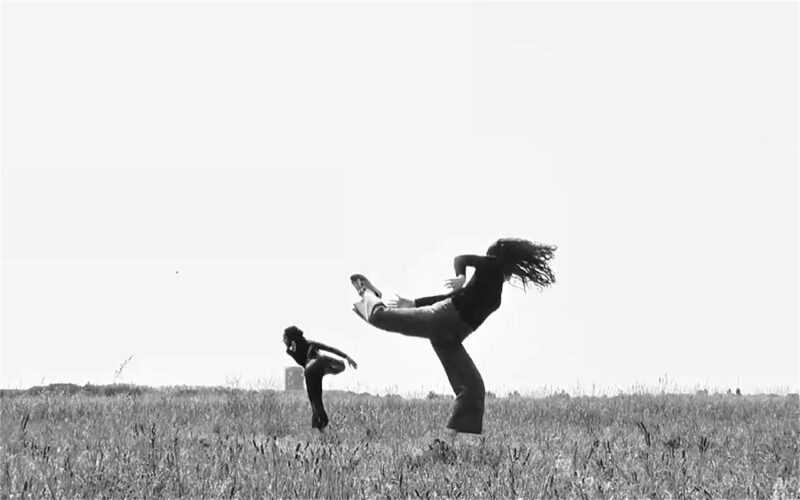 Do mirrors burn? is a trio featuring two movement artists and one musician. The two female movement artists find themselves in a reflection of their lives and long-time friendship as well as their personal, current state of being. Originally intended for live performance, Do mirrors burn? was created from a source of movement tasks and tools. However, from the beginning, their friendship and lived experiences served as the undercurrent for their concept. Britt and Whitney explored what it would mean to allow physicality to take priority in the creative process, and in turn discovered the imprinted dramaturgy of an inherent reflection of duality; Discovering two sides of the same and finding self in the other.

This adapted film version was born from the current world state, and was created as part of SOUNDANCE Festival Berlin 2020. The moment of creation itself required physical distancing due to Covid-19. Here, we see overlaid images of what was once a duet, reimagined into two individual solos. The result is a ghosting of physical touch and movement partnering which once existed, but no longer does. This evolved version demonstrates searching for another who is no longer there in the physical space. The original drum score by European composer David Guy highlights what it means to work together while apart.

What does it mean to create – and even more, to co-exist – with someone who knows you so well, they could be your mirror image? What happens when another person enters that dynamic, and how does that reflection carry when left alone?

Audience members may access the private Vimeo link at any time during the Festival. Appropriate for all ages.

Whitney Casal is a Spanish-Canadian-American dance artist currently based in Berlin. She has studied a range of dance and movement styles for over 20 years, some of which include contemporary dance, classical ballet, modern, improvisation, yoga, and somatic practices. Whitney holds a Bachelor of Fine Arts Degree in Dance and Photography from the University of the Arts in Philadelphia, as well as a certificate from the intensive training program at La Faktoria Choreographic Center in Pamplona, Spain. She also completed her certified 200-hour Yoga Teacher Training at Dhyana Yoga in 2015. Previously, Whitney premiered works as part of the Philadelphia Fringe Festival in 2016 and 2017: Coffee? and SPILT MILK in collaboration with Ella Cuda.

Britt Davis is an American choreographer, performer, model, and dance educator currently residing in Berlin. Currently, Britt is performing in various projects, choreographing her own work, working as a movement model, and teaching regularly at BBIS and The Center Berlin. As director and curator, Britt recently opened a dance series called TanzInTents at Zirkus Mond. In 2019 she premiered her first evening-length solo Recollect in Berlin with musician Marie Kruttli and illustrator Ekaterina Koroleva. Previously, she performed with MONAD at the Spirit of Dance Festival in Astana, Kazakhstan under the direction of Lena Kilchitskaya and Merlin Ettore. She also co-created Layered for the 2018 Performing Arts Festival Berlin with Anna-Lise Marie Hearn, and was a guest performer with Chaim Gebber / Open Scene from 2015-16.