Boyer College of Music and Dance presents The Shadows We Cast 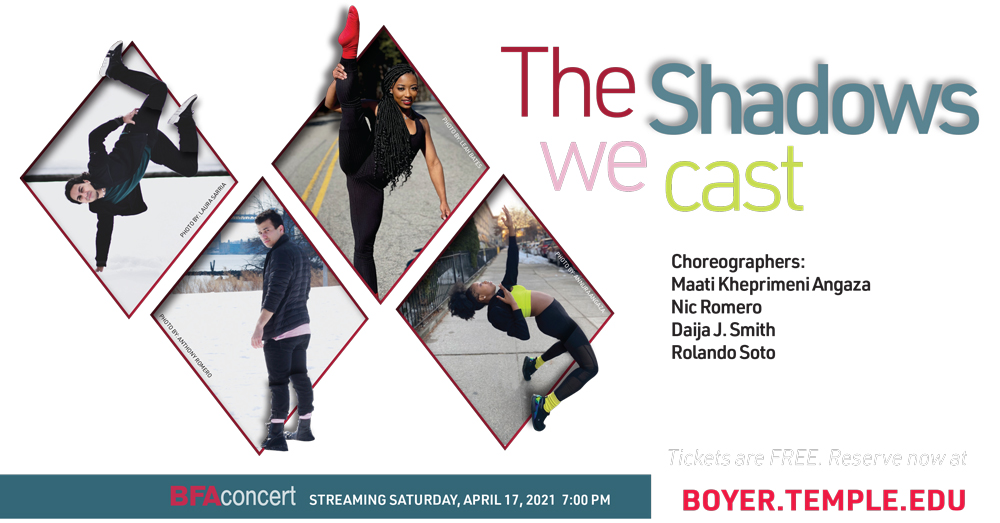 The Shadows We Cast showcases the work of four graduating students in an online screendance festival. The concert will include four works envisioned, choreographed, and directed by these talented artists and performed by Temple Dance students. The dance films will be live-streamed, and there will be a Q & A with the choreographers at the end.

Rolando Soto’s, A Shadow of Myself is a portrayal of two versions of self. One side showing his hip-hop background, and the other shows his progression from his dance studies, and when they come together, it is a mix of both. They don’t notice each other’s presence, but they’re always there. Rolando is a dancer born and raised in Bushwick of Brooklyn, New York, who grew up with Hip hop, Contemporary, and Latin dance styles, including Salsa, Bachata, Merengue, and Ballroom. When he moved to Pennsylvania, he became more fluid and began his Modern, Ballet, Jazz, and African training. He also got hired and learned Polynesian dances, including Hawaiian, Samoan, and Tahitian. He loves the never-ending flow of dance and how everything is a seamless breath of a moment.

Maati Kheprimeni Angaza is a versatile and professional dancer from Brooklyn, New York. Her training includes Hip-Hop, West-African, Ballet, Jazz, and Tap. She has worked with notable names such as Chris Grant, Amber Mark, Frank Gatson, Brandy, and more throughout her career. She is ready to continue her creative endeavors and take on the world. Into Me is a piece dedicated to the city and art that has shaped her into the dancer she’s become. This is her final work at Temple and the beginning of a new chapter.

Nic Romero’s Bond/ed, represents how every connection that we make in our life has the potential to stay with us forever. Finding a place and a community where you are cared for is a precious thing. Five strangers meet and together form a lasting bond shown through a collaboration of modern dance and lighting. Nic has been an active stage crew member in the theater for the past three years and has developed a Lighting Design repertoire, and lighting was an integral part of the construction of this piece. He has been trained in many styles such as Ballet, Modern, Jazz, and African Dance. Nic would like to thank his dancers and everyone who helped him make this project come to fruition.

And finally, Daija Smith began her love for dance at an early age. Originally from Prince George’s County, Maryland, she has performed in many local dance companies, studying Ballet, Jazz, Modern, Hip-hop Tap, and African Dance. Daija has also attended several prestigious programs such as Joffrey Ballet School, Disney Youth Education Series, Duke Ellington Youth Ensemble, and Earl Mosley’s Diversity of Dance. Lab Rat is a fusion of modern and jazz techniques that explores the process of change and acceptance of growth. Throughout her four years at Temple University, Daija’s art has shifted dramatically, while studying at Temple has allowed her to find and explore new ideas and concepts. In return, this has expanded her movement vocabulary and pushed her to grow in many areas. This experience of change has shaped and prepared her for her journey beyond Temple University. Daija would like to thank all of her family, friends, professors, and peers for the continuous push that has developed her into the performer she is today.